#1
Reakcje
24 0 0
Dzień dobry!
First, sorry for writing in English here but unfortunately I don't speak Polish. If this is a problem, please tell me! I had been reading this forum for a while using google translate and I'm really impressed by the numbers of beautifully weathered rolling stock and scratchbuilt locomotives! This also seems a great place to find some information for future projects.
But let me introduce myself. My name is Floris, I live in Utrecht, Holland and after making models of Dutch steam locomotives for many years I became more and more interested in PKP-engines after some visits to Wolsztyn and Chabowka. After a friend who had been a fan of Polish railways for a long time already (his name is Ernst-jan) asked me to build some PKP-engines for him (a Tkt48 and Ol49) I decided it would be nice to have some PKP-models for myself too, so I've built a number of them during the last couple of years. Ernst-jan and I have also built a small Polish modular layout loosely based on Stefanowo station, so my engines actually have some work to do. Some more about this layout later.

I don't make fine-scale supermodels, that way it would take too much time for a model to get finished and require a lot of discipline. Since it is also my job to make models (first mostly architectural models, now I work for artitec) I need my discipline at work already. Enjoying your hobby when you do the same things at work can be a bit tricky sometimes, but it also adds a lot of extra possibilities, for example I make the parts for most of my models using the CNC-milling machine at work and I've made some special PKP-detail-stuff like front lights and small parts for steam engines as resin castings.

On to the locomotives then!
Some were small projects, just modifications of existing German models to how they looked like in PKP-service in the 1970's and 1980's, others were more or less scratchbuilt. I always look for pictures of one specific engine and try to model it as exactly as possible, also dirt and damage on the real engine, to get as close as possible to the atmosphere of the real engine. I really love the very individual looks of Polish engines!

First I started with two small projects, a Ty2 and Ok1, both Liliput-models (yes, you really have to be quite an idiot to try to make something decent out of a liliput-P8....it was actually not such a small project after all ;-) )

Then I wanted a real Polish engine, so i started scratchbuilding an Ol49, the Ol49-59, painted like it ran in Wolsztyn in 1999/2000 (all black, 2 lights in front and no number plate on boiler front) I used Liliput wheels and Roco motor and gears. Motion parts were made on a very simple CNC-milling machine, I didn't know how to make etched parts at that time. The rest of the engine is made of CNC-milled polystyrene sheet. I first made a working chassis...

and then it grew bit by bit.

and here seen in service passing the level crossing on the stefanowo-layout ;-)

That's it for now! If you don't mind me writing in english I'll write something about some more PKP-stuff I've built soon ;-)
Dziękuję & Do widzenia
Floris

#3
Reakcje
58 1 0
Ol49 looks awesome, great job. It's one of the best models of this engine build from the scratch in H0.
We are waiting for more PKP stuff from You.

Welcome on the forum. For the most users here English is no problem. And in worst case, I can help with the translation if needed.

Really nice models you have made there, especially when taking into account what base they are built on. I hope we see them in Piotrków, when you guys bring over your Layout ?

#8
Reakcje
123 0 0
Fantastic job and shots too. This might give steam fans some inspiration to build plastic Ol49.
The details on this old beauty are pretty and the painting/weathering look like awesome.
Did You build the Polish passenger wagons <Ryflak>? I see on Your bench.
V

#10
Reakcje
24 0 0
Dziękuję Bardzo!
Indeed, these locomotives (and a couple more, of course) will come to Piotrkow! I am really looking forward to this show, it's the first time we travel that far with a layout! I already know it's going to be a funny experience, going to Poland with a PKP-layout and not actually speak Polish. ;-)

@RS11: well spotted! I made 2 ryflak-carriages just before the Robo-models were released. it's a bad time to build your own models, who knows what you can simply buy next year... ;-)
anyway, here are some pictures. I basically designed a plastic "model kit" that could be made on a cnc-milling machine, some parts were taken from cheap old models like roofs and windows of lima-DB-carriages, Schicht-bogies etc.
First, a modernised 43a (with "gummiwulst")

The 102A has slightly different seats just like the real one.

The doors can't actually be opened but I made a couple of them in half-open position for some real PKP-atmosphere ;-) 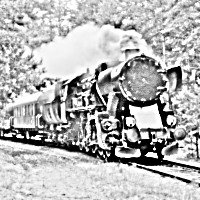 FREMO Polska
KKMK
#14
Reakcje
1.074 2 0
Hello Floris! Congratulations, especially on the models of steam engines you have built from scratch. I also use similar technologies with lots of polystyrene which is a very nice material for processing. I understand you built more than you showed us, I saw your(?) Ty45 on Flickr, have you ever tried Pt47 or Ty51? I am eager to see more pictures. Models of Polish steam engines are something I have been trying to encourage more people in Poland to do by themselves because it is rather unlikely that professionals will launch volume production of all of them, contrary to diesels of electric locomotives. Do not be afraid of writing in English here, and pictures also speak!
J

MSMK
PGM
#16
Reakcje
830 33 1
Helo! I didn`t notice the presence of stool and sink in your toilet. What can I write more? Models are perfect and reach of details. Simply: they are at the highest level of quality and professionalism. Congratulations.
Greetings from Poland Michal .
OP
OP

#17
Reakcje
24 0 0
Again, Dziękuję Bardzo!
I am at work now, waiting for some putty and paint to dry so it's a good time to write a little "Ty-special" about another, slightly special Ty2, a colorful Ty5 and indeed a Ty45!
First, Ty2-730. Quite a number of Ty2's had tenders, taken from other, scrapped locomotives, so far I have seen them from Pk1 (S10), Ty5 (br 50), Ty4/Pm2 (type 2'2'T34) and even Ty51. Because I had a number of old Piko/Gutzold BR52's that actually didn't look that bad but were not really useful with their condensing tenders, I decided I could do just like the PKP-people did and put a tender of an old Roco br 17 behind the gutzold-locomotive. Then there is of course the job of taking away all the condenser-pipes and add a lot of new detail. I was generally quite happy with the result, though the smoke deflector plates seem a little bit small, might change that some day.

no outside photo's this time, weather was bad when I finished this locomotive... It's just an ordinary black and dirty Ty2 but that weird tender full of rivets give it some charm.

Then the next engine, a Ty5. It's a modified Roco-model (I was actually surprised how much I had to change to make a correct Ty5-model!) and my most clean and colorful PKP-engine so far. The real Ty5-42 had one smoke deflector plate replaced at some point, so my engine also has 2 different ones.

Then, Ty45 379 from wolsztyn. It seems nobody thinks a Ty45 is very interesting because I never saw any models of it. I thought it would be a good idea to do something about that. This model is about 50% scratchbuilt, for the locomotive I used a modified Liliput br 95-chassis, so the motor is actually inside the locomotive and not in the tender. The tender body was taken from a fleischmann br 38 (I used the motor and bogies of that tender already for some other project) so the tender is very heavy because of the metal body but has no motor. This results in a very heavy locomotive and very heavy tender, both without any rubber tyres, so it runs beautifully and never stops because of dirt on the tracks. Because of this, all shunting in Stefanowo is done by this engine.
The body of this locomotive was made using cnc-milled polystyrene parts and some etched brass details.